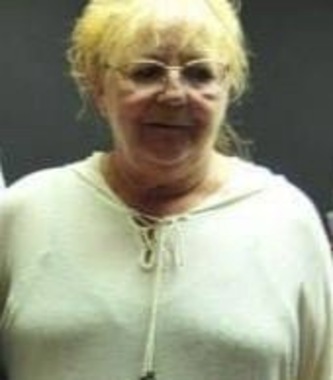 Back to Violet's story

Violet Darlene (Cox) Riker, 70, of Washington, went to her heavenly home Wednesday, Jan. 29, 2020.
She was born May 17, 1949, in Washington, daughter of the late Ernest Cox and Marguerite Traylor Cox.
Violet graduated from Washington High School and attended First Baptist Church. Violet enjoyed her family and watching after her grandchildren; she also dealt in antiques frequently. In the summer she could often times be found sitting in her swing while the kids were playing, her family was her everything. Violet also loved animals and at one time even had a pet monkey.
She leaves behind her loving husband of nearly 50 years, Charles Hugh "Charlie" Riker; children, Brian Riker, Derek Riker; stepchildren, Leanna Lamkin and Tommy Riker; grandchildren, Jesse Riker, Robert Devin, Kelly Archer, Amber Yoder, Stephanie and Shania Smith, Brian Riker Jr., Dometery Riker, Caitlin Riker, Kaya Riker, Tiffany Riker, Damon Riker, Sarah Riker, Tucker Riker, Jami Bunch, Casey Dawn Mayes, Charlie Stone, Ashley Riker and Spencer McDonald; many great-grandchildren; and several great-great-grandchildren; one brother, Steven Riker; several nieces and nephews; and sister-in-law, Tina Cox, wife of the late Billy Cox.
She is preceded in death by a daughter, Samantha Riker; two sisters, Patty Joann Pettigrew and Connie Sue Swafford; and three brothers, Jerry Lee Cox, Billy Ray Cox and Joseph Douglas Cox Sr.
There will be a visitation on Saturday, Feb. 1, 2020, from 11 a.m. until 2 p.m., with a service following at 2 p.m. at Gill Funeral Home, with Pastor Jewel Gilley officiating. Burial will be in Oak Grove Cemetery. You may leave an online condolence at www.gillsince1872.com.
Published on January 30, 2020
To send flowers to the family of Violet Darlene Cox Riker, please visit Tribute Store.

Send flowers
in memory of Violet

A place to share condolences and memories.
The guestbook expires on April 29, 2020.