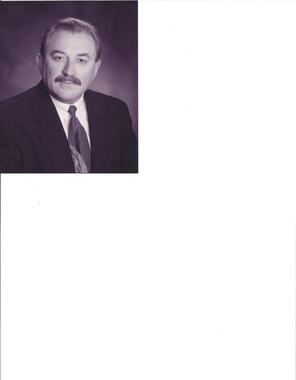 Back to Thomas's story

Thomas J. Cosgrove, 71, died Feb. 2, 2020, in St. Louis, Missouri. He was born in Washington, Indiana, on June 15, 1948. His parents were Bernard J. Cosgrove and Rosa D. Cosgrove (Colbert), who preceded him in death.
He is survived by his wife of 46 years, Barbara (Newland) Cosgrove; his children, Heather Jinkerson (Gary) and Erica Dickhans (David); grandchildren Samuel and Jacob Jinkerson and Daniel (Ashley) and Thomas Dickhans; great-grandchildren Oliver and Claire Dickhans and Claire Jinkerson; and his sister Joyce Beverly (Jim).
He is preceded in death by his parents and siblings Bernard Cosgrove, Donna Clark, Dorothea Murphy and Fred Cosgrove.
Thomas graduated from Washington Catholic High School in 1966. He graduated with a master's degree from Indiana University and after college he served in the U.S. Army for two years. He was a member of the American Legion and of the Society of Financial Services Professionals.
Before retirement, he was a teacher at Washington Catholic Schools and Tampa Catholic High School. He then pursued a career in the insurance industry and retired from Horace Mann Insurance Company in 2014.
Tom loved the outdoors, riding his bicycle, taking long walks and exercising. He also was an avid reader and history buff. He was an instant friend to anyone he ever met and a great storyteller of his many adventures in life while traveling. His greatest love though was his family and he was a wonderful husband, father, grandfather, brother, uncle and son.
Visitation will be on Feb. 15, 2020, from 2 p.m. to 3:30 p.m. at Goodwin-Sievers Funeral Home at 2020 State St., Washington, Indiana. Burial will follow at St. John's Cemetery.
Published on February 4, 2020
To send flowers to the family of Thomas Joseph Cosgrove, please visit Tribute Store. 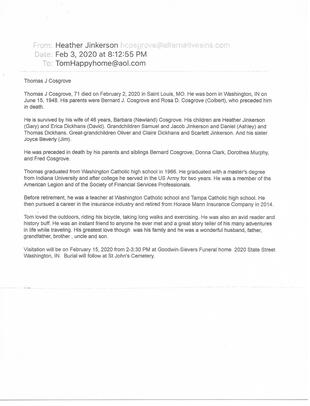 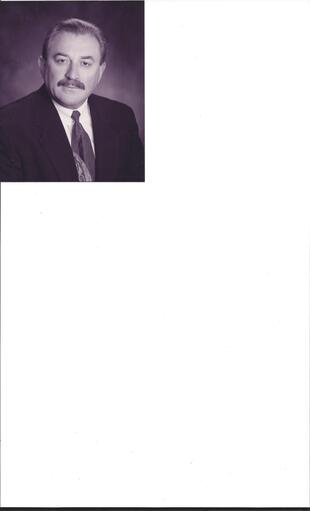 Send flowers
in memory of Thomas

A place to share condolences and memories.
The guestbook expires on May 04, 2020.

Jeffrey Z
Tom was two years ahead of me at WC. He was always kind and friendly to me and was someone I looked up to. Remember eating in his Mom's diner, "Rosies Cafe", a go to spot for WC kids. His brother Fred was a classmate of my oldest brother Bob) and was just as great of guy as Tom. Apparently great genetics run in the Cosgrove family. My condolences to Barbara and family.
Bill Borden
The last time I saw you , you were only4-5 years old. Im77 now and thought you and family very very often. on that little dead end street 5th. RIP Tommy .
Sonny burkett

America the Beautiful was purchased for the family of Thomas Joseph Cosgrove by Sonny burkett.  Send flowers

Beautiful in Blue was purchased for the family of Thomas Joseph Cosgrove by Tribute Store.  Send flowers

Sacred Duty Spray was purchased for the family of Thomas Joseph Cosgrove by Joyce, Jim and family.  Send flowers

Suresh Fernando
I had the pleasure of working with Tom for a brief amount of time while he helped seniors with Medicare insurance. He was always full of joy and laughter. I truly enjoyed the short time we worked and spent time together. He will be missed, my condolences to his family in this time of grief. Tom, I hope you enjoy the rest of your retirement in heaven while making those around you laugh and smile.
May God Bless you and your Family.
Sincerely,
Suresh Fernando
Chuck Johnson
Mr. Cosgrove was a teacher and coach when I was a student at Washington Catholic Middle School. His 8th grade boys basketball team won the Diocesan tournament. I always thought Mr. Cosgrove was the "coolest" teacher I'd ever met. I am sorry to learn of his passing and offer my sincere condolences to his famil.

Joe Sharamitaro
Heather,
We are sorry to hear of this news.
Our thoughts and prayers go out to you and your entire family at this time of need.
Tony Jones
I also will never forget when Tom came into the locker room that Saturday afternoon, after our last game in the Washington Sectional. He was always there for the team.
View all