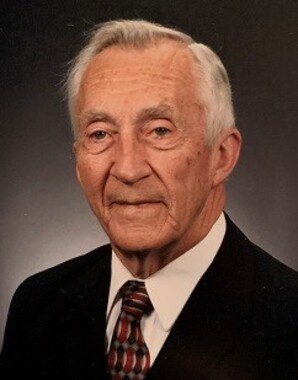 Back to Ray's story

Ray E. Pruiett Sr., 95, formerly of Washington, Indiana, passed away Feb. 8, 2020, at Community Hospital North in Indianapolis, Indiana.
Ray served in the Navy during World War II. For over 30 years, Ray worked as a traveling agent for the railroad. Ray was a member of the Free Methodist Church and was a local fisherman who provided the fish for the church fish fry. He made three mission trips to the Dominican Republic. He fell in love with the people and would always come home with an empty suitcase. Ray was the kind of person that would drop everything to help another.
Surviving is his wife, Marcella (Carroll) Pruiett of Indianapolis; his daughter, Gwendolyn "Gwen" Dean and her husband Ronald of Indianapolis; nine grandchildren; 17 great-grandchildren; and 1 great-great-grandchild.
Born Sept. 12, 1924, in Clark County, Illinois, he was the son of Stephen P. and Matilda (Summers) Pruiett. His parents; his son, Raymond Pruiett Jr.; his sister, Maxine Beltz; his brother, Paul Pruiett; his half-sister, Cora McDaniels; and his half-brothers, Harry and James Issacs preceded him.
Friends may visit with Ray's family from 10 a.m. to noon Thursday at the Washington Free Methodist Church. His funeral service will begin at noon at the church. Burial will follow in Sugarland Cemetery. A military memorial service will be held at the cemetery. Goodwin-Sievers Funeral Home is assisting with the arrangements.
Memorial contributions may be made to the Wounded Warrior Project, P.O. Box 758516, Topeka, KS 66675-8516. Online condolences may be sent to the family through goodwinsievers.com.
Published on February 10, 2020
To send flowers to the family of Ray Pruiett Sr., please visit Tribute Store.

Send flowers
in memory of Ray

A place to share condolences and memories.
The guestbook expires on May 10, 2020.