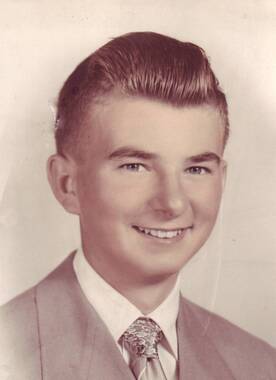 Back to Gayle's story

Gayle Alan Zinkan, 85, of Lebanon, Missouri, formerly of Washington, Indiana, passed away Dec. 7, 2019, in Springfield, Missouri.
On Dec. 22, 1987, he was united in marriage to Georgie May Gass.
He is preceded in death by his mother, Lorrain Lawyer.
Gayle is survived by his wife, Georgie, of the home; four sons, Alan Zinkan of Franklin, Indiana, Carl Richard "Dick" Zinkan of Cicero, Illinois, Burrell Wise of Falcon, Missouri, and Sam Wise of Lebanon, Missouri; six grandchildren, Greg, and his wife, Ashley, Steven, Thomas, Eion, Shannon and Haley; a great-grandchild, Kaia; a cousin, Donna Armes; and other relatives and friends.
He was born and raised in Washington, Indiana, and then served in the United States Navy from April 22, 1953, until April 10, 1957. Gayle began working for the railroad and was employed by B & O Railroad and then the CSX Railroad as a conductor for 40 years. He and Georgie had moved to Lebanon, Missouri, for the last few years.
He was a member and past commander of the V.F.W. and the American Legion. He went on the Honor Flight of the Ozarks a few years ago. He also belonged to the railroad union.
Graveside service and burial with full Military Honors will be 11 a.m. Thursday, Dec. 12, 2019, in Sugarland Memory Gardens under the direction of Holman-Howe Funeral Home of Lebanon, Missouri.
Published on December 10, 2019
To plant a tree in memory of Gayle Zinkan, please visit Tribute Store.

Plant a tree in memory
of Gayle

A place to share condolences and memories.
The guestbook expires on March 09, 2020.