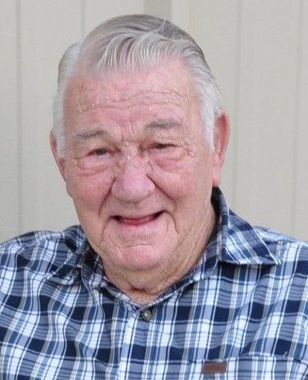 Back to Burl's story

Burl G. McRoberts, 89, of Cannelburg, Indiana, passed away Dec. 8, 2019, at St. Vincent Hospital in Evansville, Indiana.
Burl retired from Crane Naval Surface Warfare Center as a foreman. He had served in the U.S. Navy during the Korean War. Burl was a member of the Masonic Lodge in Elnora, Indiana, Hadi Shrine in Evansville, and was a life member of VFW Post 9627 in Odon, Indiana. Following IU sports, woodworking, and being a "mushroom finder" were some of his favorite things to do.
Burl is survived by his wife, Maudie (Jones) McRoberts; his children, Gordon McRoberts and his wife Patricia of St. Charles, Missouri, Debra Kavanaugh and her husband Roger of Versailles, Indiana, Jane Smith and her husband Glenn of Cross Plains, Indiana, Patricia Gingerich and her husband Jacob of Montgomery, Indiana, and Barbara Hinkle and her husband Larry of Washington, Indiana; a sister, Doris Inman of Bloomfield, Indiana; 13 grandchildren; 21 great-grandchildren; two great-great-grandchildren; and several nieces and nephews.
Born March 26, 1930, in Daviess County, Indiana, Burl was the son of James and Agnes (Martin) McRoberts. His parents; a granddaughter, Greta Wilz; his sisters, Ada Wallace, Mary King and Barbara Hasler; and his brothers, Paul, Robert, Virgil, Barney, Roy, Jack and Joe McRoberts preceded him.
Friends may visit with his family from 4 p.m. to 8 p.m. Wednesday at Goodwin-Sievers Funeral Home, 2020 State St., Washington. The funeral will be at the funeral home Thursday at 10:30 a.m. Burial will follow in Sugarland Cemetery.
Donations may be made to the American Heart Association. Online condolences may be sent to the family through goodwin-sievers.com.
Published on December 9, 2019
To plant a tree in memory of Burl McRoberts, please visit Tribute Store.

Plant a tree in memory
of Burl